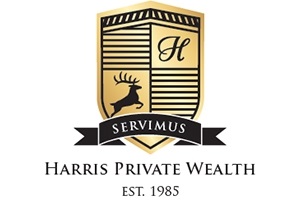 People sometimes ask about our logo.  If you’re thinking it resembles a traditional family crest or coat of arms, you’re correct.  Ours is an updated version of the original Harris family coat of arms which was brought to America from West Prussia in the 1800’s by the Herschkowitz family.   Heraldry is a European custom dating back to the Middle Ages.  These family symbols originated with the armor worn by medieval knights, and ultimately were distilled into a shield with a figure above it – the “crest”, and a family motto beneath.   The designs on the shield, called “chargers”, would be altered to represent how each generation made it’s living or reputation.  Only the crest and the motto were same between generations.

The leaping deer on our logo originally was at the crest of the shield.  “Hersch” is the German word for deer or stag, and was the root of the original surname, which was changed to Harris for better assimilation into the new country.  The family motto, “Servimus,” Latin for “we serve,” was carried beneath the family coat of arms.  This was the unofficial logo of the Harris Company, a department store chain founded by family members in southern California in 1905.  The business thrived there for over one hundred years because it was known for both high quality merchandise and impeccable customer service.

It is in the spirit of “servimus” that we honor our legacy by continuing the long family tradition of service to our clients.